The weeks before Christmas seem like the perfect time to reflect back on the year’s new and interesting customer electronics. Back, despite no popular demand, Tom’s Top Tech of the Year.

10. The Motorola Keylink. For $25, this little guy works with a free Android or iOS app to make your phone ring if it is within 100 feet. Or use your phone to find your keys on a map. I even appreciated its understated style.

9. One of the few new models of an existing product to make the list, the Microsoft Surface Pro 3 comes in at number nine. You still have the platform for which Windows 8 was made – a tablet that doubles as a laptop when used with the optional keyboard. Lighter than a MacBook Air, the Pro also comes with a higher resolution screen. The 12″ screen is up from last year’s 10.6″ screen. That is midway between the 11″ Air and the 13″ Air. Could that size be “just right”? The resolution, at 2160 x 1440, embarrasses the Air’s 1440 x 900. The new omni-position kickstand matches the flexibility of a conventional laptop. The Pro is lighter than Air (pun intended) and its own Surface Pro 2 predecessor. It even has all of the choices of Intel processors one might find in a traditional ultrabook. The Pro starts at a price of $799.

Android Wear carried several smart watches on its shoulders and in to the market. The first to be round was the Moto 360 from Motorola. Android Wear seems to make more sense to a lot more people than Google Glass. Let your watch vibrate on your wrist when you have a notification instead of pulling out your phone to see what’s going on. Smooth. Frankly, I like the way it looks and I like that I can pick from numerous different watch faces (skins) depending on my whim at the moment. Very Androidy. If I were going to buy a smart watch, the Moto 360 would be it. I’m a big fan of Google Now and Android Wear is the peanut butter to Google Now’s chocolate. That is why the Moto 360 comes in at number 8 on my list. Prices start as low as $250. (I paid more than that for my surf watch.) 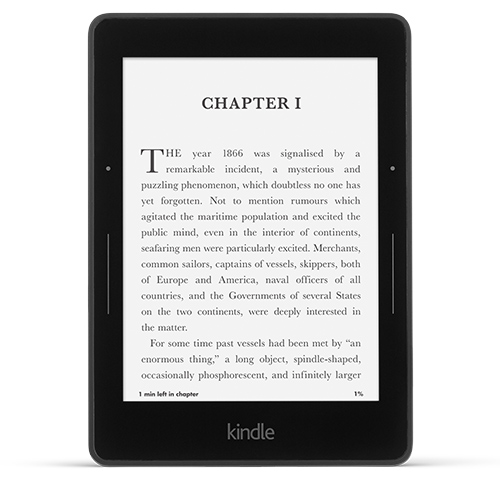 Widely perceived to be the best ereader money can buy, the Kindle Voyage comes in at number 7- even if it does take a pretty penny to buy it. Its 300 ppi display is the resolution used for professional print graphics. The new PagePress lets you turn pages without lifting a finger. The brightness automatically adapts to the ambient light. If I didn’t have a perfectly good PaperWhite, I would be shelling $200 for one of these.

Yes, I have mocked the Chrome OS as little more than a browser. But as Google Drive has evolved, Chrome OS has become a top option for casual computer users. While there are some nice ChromeBoxes out there, my pick is the new LG All-in-One ChromeBase starting at $350. That is right, an all-in-one for less than you might have payed for your 1080p monitor. Forget viruses and updates, this is the easiest OS to care for a user can get.

But it gets even better. At number 5, the Lenovo Yoga Tablet 2 Pro is one of my favorite new tablets. If this baby had an IR blaster and a stylus like the Samsung Note tablets, I would be recommending this to everyone for a tablet. Like the Surface Pro 3, the Yoga is a full on Windows 8.1 tablet, but with an Intel Atom processor instead of one of the super Intel laptop processors. I like the Yoga’s kickstand better and the battery grip. You can even hang the Yoga like a picture. And I want the 13.3″ of screen real estate. Especially since the Yoga matches the Pro’s resolution. Does your tablet get 15 hours of battery life? Can you use the USB port to charge your phone? The Yoga does both. Oh, and did I mention that it is also a video projector? I think a lot of families that are into camping are going to enjoy an outdoor movie next summer. Sure you don’t get the better processors as an option, but then again pricing starts at only $470! There is a ton of creativity, innovation, and usefulness packed into this tablet.

My pick for the best phone of 2014? The Samsung Galaxy Note 4 coming in at number 4. Smaller in the hand, but with a larger screen than the iPhone 6 Plus it also has a higher resolution display, better battery life, a stylus that is actually of practical use, and the full glory of Android widgets and Google Now. Yes, I bought one. $299 under contract. Lucky for Samsung, the first time Apple introduced an ugly iPhone, Samsung came up with a phone that begins to close the gap with Apple’s build quality.

How does a TV make the Top Tech list? By bringing us an OLED screen with perfect blacks. Plasma smasma. This is the new standard in picture quality. It is relatively affordable at $3500. The LG 55EC9300 55″ 1080p 3D Curved OLED TV is a display of beauty and our number 3 for this year. They say that 4K doesn’t look that different at 55″ and smaller so if the size is right, this is the TV for you. So new we can’t even buy one from the Sony store, the Sony Alpha A7II is my pick for camera of the year. Other than shutter noise, the mark II has solved all of the issues I had with the first generation of full frame mirrorless cameras. (Shutter noise was at least dampened a bit for this generation.) And at under $2,000, it is a way cheaper option than anything Nikon has to offer. If Sony has the lenses for this camera that are suited to your photography, this is the best way to spend your money.

Whoa! Here we are approaching the end of our list and Apple didn’t come out with the most exciting phone, tablet or laptop. But coming in at number 1, the 5K iMac Retina is the best computer money can buy and a great value as well. As a photographer, this kind of resolution is incredibly useful. I imagine it would also be nice for those folks who are editing 4K video. There are enough pixels to see your 4K at full resolution and still have the editing panels open on your screen. All of this starts at a mere $2,499. One would be hard pressed to find 27″ 4K monitor for that money. Apple may not dominate every market, but when it comes to desktop computers I find it hard to imagine what power user wouldn’t want this one. I know I do!